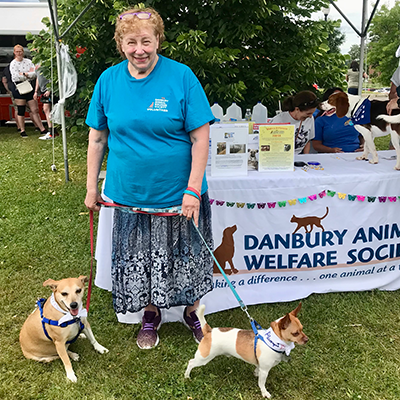 Fran Hendrickson has been a volunteer at DAWS for over two decades! After having animals most of her life, she wanted to do something to help dogs in need and show them what it felt like to be loved. Fran started socializing dogs one night a week in the shelter before eventually volunteering at our community events. “My first adoption was a little SATO dog from Puerto Rico named Sophie. My husband had suffered a major stroke and we wanted to take a small dog in need to bring to nursing homes to visit residents. She was a great little pal. Eventually she lost the use of her back legs and needed a stroller for our walks. After some time, she required a wheelchair, which we got from an amazing organization, handicappedpets.com. Sophie was so happy and could bounce down three steps and race across the lawn. Cancer finally took our sweet girl at age 14 but she was everything that rescue is about,” shares Fran.

After Sophie passed, Fran began fostering again. She welcomed Laura into her home, an extremely shut down small beagle. It took almost four months for her to settle and get adopted. Then, two years ago, Fran met her second “foster fail,” a Chihuahua named Hilton (now named Peppy). He was terrified of so many things but he quickly bonded with Fran’s dog, Bella. Suanne McManus, DAWS’ Community Outreach Coordinator explains, “I like to think of Fran as the ‘little dog whisperer.’ Her calm demeanor and love for the little ones has made all the difference in their lives. She spends endless hours petting, hugging, and playing with these special dogs on their own terms. I’ve seen the transformation of these nervous little pups turn into confident, adoptable pets.”

In addition to fostering and helping at events, Fran has participated in transports to New Jersey to pick up the new cats and dogs from our shelter partner in Kentucky. While she loves dogs, she also spent a year fostering young kittens that were without their mother, bottle feeding and raising them until they were ready for adoption. Her foster fail from that adventure is now 13 years old! “I encourage people to get involved with DAWS in whatever capacity they’re comfortable with. There are so many opportunities available and we’re all in it for the animals,” Fran says.

Fran retired in 2009 after 30 years as Coordinator of the Danbury Senior Center. For over 45 years she has been a musician playing keyboard and accordion for dancing – contras, squares, International Folk Dance, and for children’s programs. Since 1977 Fran has been involved in re-enacting as a colonial woman from the Revolutionary War years. Her late husband was a dancing teacher. They made the transition to historic dance and music in the late 1970s. Their research prompted the creation of a small publishing business to produce books of dance and music from newly rediscovered primary sources. In her spare time, Fran loves learning new things and teaching people about animals, history, and music.