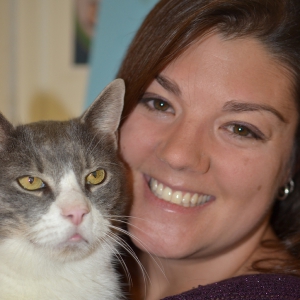 When asked what she loves most about volunteering, Grace says, “I love getting to spend time with all of our adorable animals, and really contribute to their futures and know that I’m doing my part to help them. I had been considering a career in veterinary medicine for a while, but for a number of reasons that didn’t work out, so volunteering at DAWS helps me to “scratch that itch” (pardon the pun) and spend as much time with animals as I can! In addition to allowing me to pursue my passion of helping animals in need, I have also made lifelong friends in my time volunteering here.”

Over the past decade, Grace has encountered many experiences while in the shelter and helped facilitate countless adoptions. One that sticks out her the most was with a cat named Pepper. He was labeled as “difficult,” and many feared he was unadoptable. He was a declawed black and white kitty who was not doing well in the shelter environment. After a few months, DAWS found him a fantastic local adopter who loved him so much that she would bring him back and forth with her to their vacation home. Pepper was barely even “pettable” while in the cattery because he was constantly on edge without his claws, but when we went over to visit him in his new home, we found the adopter holding him like a baby as he purred. “It was amazing!” Grace exclaims. “I remember crying that day from happiness! These are some of the best moments we get to witness in the world of rescue.”

Cat Program Chair Gail Downing states, “Grace has dedicated herself to DAWS , and to our kitties for quite a few years.   She always has a smile for co-volunteers, as well as prospective adopters.  She has the ability to help match an adopter with their perfect match.  DAWS is lucky to have her.” “Volunteering in animal welfare is not easy – it can be daunting, emotional, and even sad when you stop and think about what many homeless animals go through before they get to us. However, you have to look ahead. Animals have such an amazing capacity for trust and forgiveness, despite what may have happened to them in the past, and if you take your cues from them, you can truly focus on giving them a better future,” Grace explains.

Grace lives with her husband and their kitty in Bethel. She met her beloved “soul cat,” Basian, whom she adopted from DAWS in July 0f 2012, after losing her previous kitty. In her spare time, she loves music and attends as many concerts as she can. Grace is also quite creative herself and enjoys playing piano, singing, and crafting!