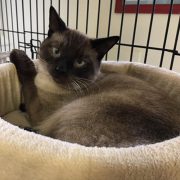 There are frequent misconceptions and misinformation out there about FIV. Unfortunately, even some vets who don’t keep up with the latest research on this disease can be mistaken. In the interest of enabling you to make an informed decision regarding the adoption of an FIV-positive cat, we would like to present the following information.

The name pretty well describes it. The Feline Immunodeficiency Virus (FIV) is: (a) a virus that (b) infects cats (felines) and (c) causes a deficiency in the cat’s immune system.
A cat that is infected by the virus is described as an FIV-positive cat, meaning that the test used to detect the virus in the cat showed a positive result.

FIV is not HIV, the virus that can eventually lead to AIDS in people. You can’t be infected by FIV. An FIV-positive cat is not a health threat to you or your family.
FIV is also not contagious to your non-feline pets.

What about my other cats? Are they safe from it?

FIV can only be transmitted between cats by deep bite wounds. Occasionally, an infected female cat can pass it to her offspring during birth. For this reason, infection is mainly a risk for

For a pet owner with spayed or neutered cats, where the cats don’t have serious fights, the risk of infection is minimal. You can have an FIV-positive cat in your home for years without fear of transmitting the virus to your other cats.

What are the effects of FIV?

A cat that is infected won’t show any obvious symptoms initially. The effect of the virus is to reduce the ability of the cat’s immune system to fight off other infections. The result is that the cat is at a higher risk of becoming ill from other diseases.

How it is detected?

A blood test can detect the presence of antibodies in the cat, indicating infection. The test is frequently administered as part of a “combo” test used to detect FeLV.
Because a newborn kitten will have antibodies from its mother, the kitten may show a positive test (to the antibodies) without actually being infected. A positive test in a kitten should be repeated when six months old to confirm.
Many adoption groups that test for FeLV will also test for FIV, using the combo test, so you’ll know the status of the cat before adoption. Some don’t test for it, and this can be justified because FIV is not typically a threat to the well being of any other pets in the home.
In some cases, the FIV infection is discovered after a cat has been into the vet to treat a bacterial infection that just won’t go away, even after rounds of antibiotics.

Is there a vaccine?

There is a vaccine to help prevent the transmission of FIV, but the vaccination is not 100% reliable and will generate antibodies that make it very difficult to determine later whether the cat is infected or only vaccinated. A vaccine may be of little usefulness for the cat owner who keeps cats safely indoors.

Is it expensive to treat?