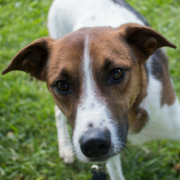 Dobby is a sweet and loving 1-1/2 year-old Collie mix in need of a family. He was extremely scared when he arrived at the shelter in Kentucky, and unfortunately was placed on the list for euthanasia. DAWS had a transport scheduled and decided to take a chance on him. Since arriving at our shelter, he has transformed into an energetic and playful pup who loves long walks and romping and playing in the yard with squeaky toys. He’s still a bit nervous when meeting new people, but is willing to give out kisses to whomever is willing to accept him.

Dobby is fantastic to train; he learns quickly and knows his basic commands. He is also very sweet. He is energetic and will need a positive way to release that energy. He’d make a great running buddy and would do well in doggie agility or participating in other dog sports.

Somehow Dobby learned to climb fences, so his new family will need to be aware of this. He would do best in a home with a very, very high fence, a yard with an electronic fence, or a non-fenced yard where he is not left unattended. As long as he gets to run and play an expend his energy in a positive manner, he will be a great dog for an active family.

Tips for Selecting a Groomer
Scroll to top