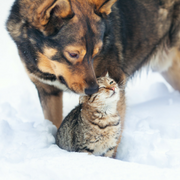 Usually the answer to this question is, it depends. There seem to be people who clearly define themselves as “cat” people and others who are self-proclaimed “dog” people. But the love of animals goes well beyond this particular two-way debate.

When it comes to dogs and cats, those siding with either of them come with distinctive opinions as to why their viewpoint is best. Personally, I am the proud pet parent of both a dog and a cat, so I can easily see each side of this well-discussed coin.

Cats can be aloof at times, but they still demand our immediate attention and are extremely affectionate, cute little critters. Felines have even been known to suffer from anxiety and unusual animal-related stress disorder when they are aware from their people. Dog lovers will argue their four-legged best friends are always overjoyed to see them regardless of the circumstance, citing instances of separation anxiety, when canines simply can’t be away from their owners for extended periods of time.

Both species of these cuddly critters capture our hearts with their undying love and affection. So let’s take a look at some examples of of love and devotion from cats and canines throughout the ages to see if we can determine who the winner might be in the “Man’s Best Friend” category:

Scientists report dogs as human companions dating back to the ages of cavemen, finding bones of them laying beside their masters and evidence of them being fed scraps. History also reveals that ancient egyptians worshipped and adored cats as gods. Although the timeline may be fuzzy on this concept, canines will win from a purely anthropological point of view as being the first domesticated.

But can the award of “Man’s Best Friend” be bestowed on one species purely from a time-based argument? Look at the differences between the two…canines were being thrown bones, while felines were exalted as divine gods and deities in the ancient Egyptian culture. The discussion continues and evolves throughout history.

The Lengths That They Will Go…

We’ve all heard stories about the distances some pets have travelled to be reunited with their beloved masters, but there are also some ancient tales where animals have done the extraordinary to stay with their owners, even beyond life itself.

There’s an ancient myth about a dog named Waghya, that couldn’t bear to watch his deceased master go up in flames during a traditional Indian burial ceremony. According to the legend, the dog leapt into the fires to be with his beloved companion. Less dramatic, but still endearing, if you were to research dogs laying on their master’s graves after their human’s departure, you’ll find volumes of these examples. On the other hand, Egyptian cats were mummified along with their owners to join them in the afterlife, according to ancient custom. Alternatively, if you do an online search for the most loyal cats after death, and you’ll likely only find breeds who stick by their master’s side during the life of their owner, and not after their demise.

Regardless of these myths and documented truths, our pets are our loyal companions. Whether a person has a cat or dog (or both), he has made an unbreakable bond with his loving pet, and there really is no room for debate. There’s a true connection we make with our four-legged friends whether they’re a fluffy feline or a doting dog, we can all safely agree that they’re all man – and woman’s – best friends for life