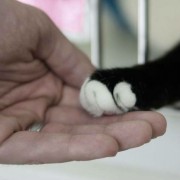 Not long after being featured in the Love Stories article in the February newsletter, three of our long-term residents at DAWS found the love that they deserve with new families.

From Love Stories to Love Matches

In the spirit of Valentine’s Day, an article called Love Stories was written for the February newsletter to feature some of the long-term residents at DAWS who were in need of some luck to find forever homes.  We’re happy to report that three of those animals have found the love that they deserve.

Just as the article was being published, Tonya went into foster care with a family who was willing to give her the

time she needed to get comfortable in her new surroundings.  With new doggie friends to guide her, Tonya settled in and found her way into the hearts of her new foster family.  This family went (for at least the second time) from Foster Family to Foster Failure!  Tonya officially became a full-fledged member of the family on February 15thafter being in the shelter for 11 months.

Patch found his match not long after Tonya.  A lovely couple who have adopted many cats from DAWS over the last decade and a half fell in love with Patch when they saw him.  They wanted to give him the chance he deserved.  On February 20th, Patch went home with his new family, and to meet his new sister Abby, after being in the shelter since April 2014.  Patch has settled in nicely, is cohabitating very well with Abby, and is even spending time sleeping on the bed with mom, dad and Abby!

Eve found her forever home just in time to make it into this edition of the newsletter.  On February 27th, she took her “comfy curl” position on the couch in the Real Life Room at the shelter for the last time.  Donning a cozy grey sweater, she snuggled next to her new mom as her adoption paperwork was finalized.  It was a bittersweet moment.  Eve had been with us since April, 2015, and many folks had become quite attached to her.  While it was hard to say goodbye, we are all thrilled that Eve has finally found a forever home to call her own.

Focusing on Animal Rights in Connecticut
Scroll to top