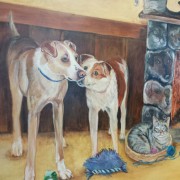 Thanks to DAWS supporter, artist ShawnaLee Kwashnak, DAWS benefited from some unexpected TV exposure on the February 6thepisode of the weekly local show Pound Posse Presents. ShawnaLee relayed the story of how she was asked to paint the mural that adorns a wall in our shelter’s Greeting Room.  This was unexpected, but fantastic promotion.

DAWS got some unexpected exposure when artist ShawnaLee Kwashnak appeared as a guest on the TV show, Pound Posse Presents, a weekly series that promotes adoptable animals in shelters, pounds, and foster care in the Waterbury, CT area and beyond.  ShawnaLee was invited to share how she combines her passion for animals with her love of art on the episode that aired February 6th.  During the interview, ShawnaLee relayed the story of how she came to paint the mural that adorns a wall in our shelter’s Greeting Room.  After working with DAWS on a TNR project, ShawnaLee was approached to see if she would be willing to paint the mural.  ShawnaLee agreed, and reached out to DAWS adopters to get her inspiration.  The mural has been gracing the wall of our Greeting Room since 2011.

ShawnaLee remains a DAWS supporter today.  You can find her on our partner page, as she will donate 10% of the cost of a portrait you commission from her if you mention DAWS.

If you didn’t catch the episode live, you can view it on YouTube.  Thanks, ShawnaLee!

Sign Up Today!
Angel in the City by Sarah Matula

From Love Stories to Love Matches
Scroll to top